What You Need to Know About the AD2 Calendar this Summer

What You Need to Know About the AD2 Calendar this Summer


What You Need to Know About the AD2 Calendar this Summer

With summer quickly approaching, we thought it would be a good time to remind everyone that the Appellate Division, 2nd Department does not schedule oral argument during the summer months. Though, occasionally, the Court will have a few special calendars during this time to help clear some of the overwhelming caseload. Typically, the last day of calendaring before the summer break is during the last week of June and calendar begins again on the Tuesday immediately after Labor Day. Scheduling for that fall calendar begins around the second week of August, so you can relax for most of the summer.

AD2 has recently implemented a new initiative to advise litigants that their case is going to be scheduled for calendaring soon, and requesting that litigants advise of dates they are unavailable for argument. Receiving a letter of unavailability after a case has been calendared is an inconvenience to the Court that should be avoided. Since this is a new initiative, it is still best to monitor the Court’s calendar for each of your cases and advise the Court as early as possible of the days which you are unavailable for argument. Below is a sample letter of unavailability for your convenience.

Have a great summer!

We represent Defendant-Respondent in the above-referenced matter.  We respectfully write to inform the Court of dates that the undersigned counsel is unavailable for oral argument in this appeal, which has not yet been scheduled.  Those dates of unavailability are as follows:

Thank you in advance for your consideration of this matter.

cc: Counsel for Plaintiff-Appellant (via email)

In matters in which a notice of appeal is filed on or after October 1, 2019, e-filing at the Appellate Division, Fourth Department will become mandatory in all non-Family Court civil matters, and voluntary/consensual in all criminal and Family Court appeals.

Electronic filing began in the First and Second Departments in 2018. Since then, the success of e-filing has led the Courts to further expand mandatory appellate filing. 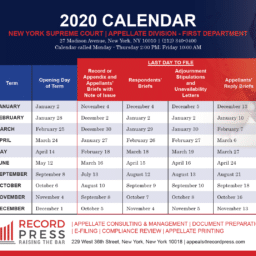